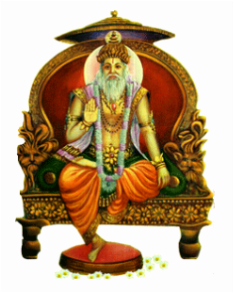 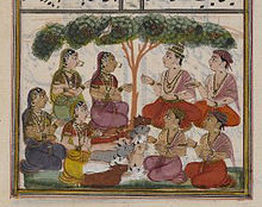 Akrura ji Speaks to the Cowherds
﻿Varshneys are the progenies of Sri Akrurji Maharaj. The first known reference of the term " Varshney " has been in Mahabharat Gitopadesh when Arjuna had addressed Shri Krishna by this name.

This group belongs to a region known as barsana, near the city of Mathura in north India. Barsaaney was used to describe people of Barsana. Variations came into use including Barasani, Barahseni, Barahsaney, Barshney and Varshney

The Barahseni are a sub-caste found mainly in western UP and traditionally represents the traders community. The Barahseni were the traditional bankers of north india and substantial landowners.The name traditionally represents the business community and some landowners and former zamindars. A large number have now entered other walks of life including the professionals and Entrepreneurs, in addition to the conventional business of trading. ﻿

Shree Akrura with Krishna and Balarama, Gopi Nath Temple
Akrura Ghat is one of the bathing ghats at Vrindavan, Mathura district. This is the place where Lord Krishna and Lord Balarama are believed to have revealed their forms of  Lord Vishnu and sesha naga to Akrura ji.


The text Adi Varaha Purana illustrates Akrura Ghat as the king of all holy places. One of the major attractions is an ancient Gopi Nath temple dedicated to Krishna and Balarama. Akrura is depicted standing in between the two. It is believed that one can eradicate all his sins by bathing here during a full moon.


Tweets by @varshneysabha
The site also presents brief information about Varshney community in bhopal. We solicit the contribution of all members and well wishers in updating of database and also in rendering the services to each other.